With the 2022 rule change on the horizon bargeboards will no longer be a feature of F1 cars, but what are they, how do they work, and will F1’s designers be able to replicate their function in 2022?

The origin of bargeboards

The first examples of bargeboards can be found in 1985, with both the Lotus 97T and McLaren MP4/2B cars sporting similar devices behind their front tyres. F1 cars at this point were up to 2.15m wide with a 1.4m wide body, compared to 2m wide car with a 1.6m body as has been the case since 2017 and will continue to be so from 2022, so the front tyre wake was naturally more outboard of the sensitive underbody than is the case with more contemporary cars. The front tyres were also smaller, and the flow around the car less well defined and controlled than now. 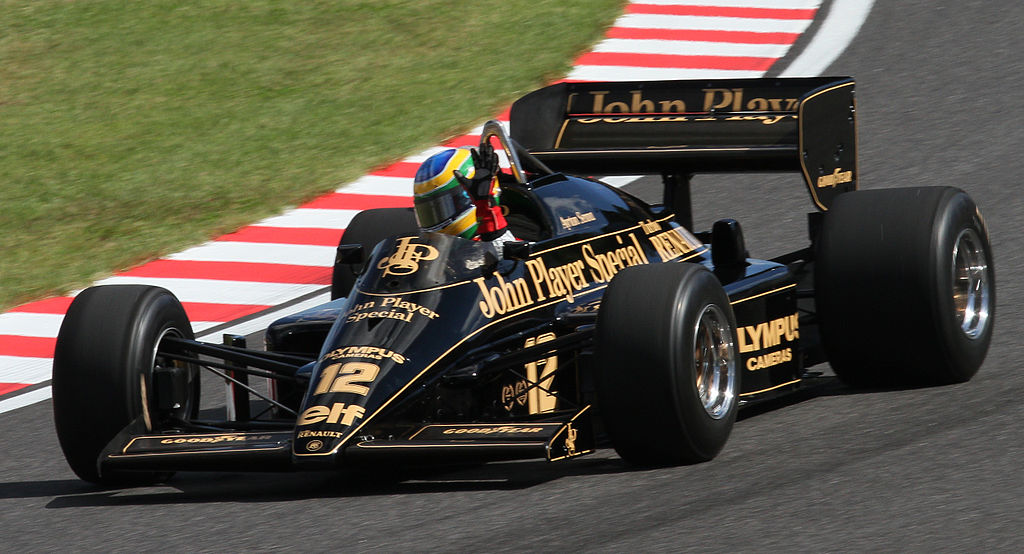 Bargeboards didn’t really catch on in the 80s with only the Lotus 98T continuing to use them (they were dropped for the 99T). However, the tyre wake management function was replicated from the late-80’s to early-90s by the ubiquitous front wing endplate and footplate extensions, which help to capture the “tyre squirt” and direct it outwards and away from the underbody. Following the tragic Imola race weekend in 1994 an exclusion zone was added around the front tyres to prohibit bodywork in that region, and the bargeboard was reintroduced later that season – notably on the Williams FW16B. 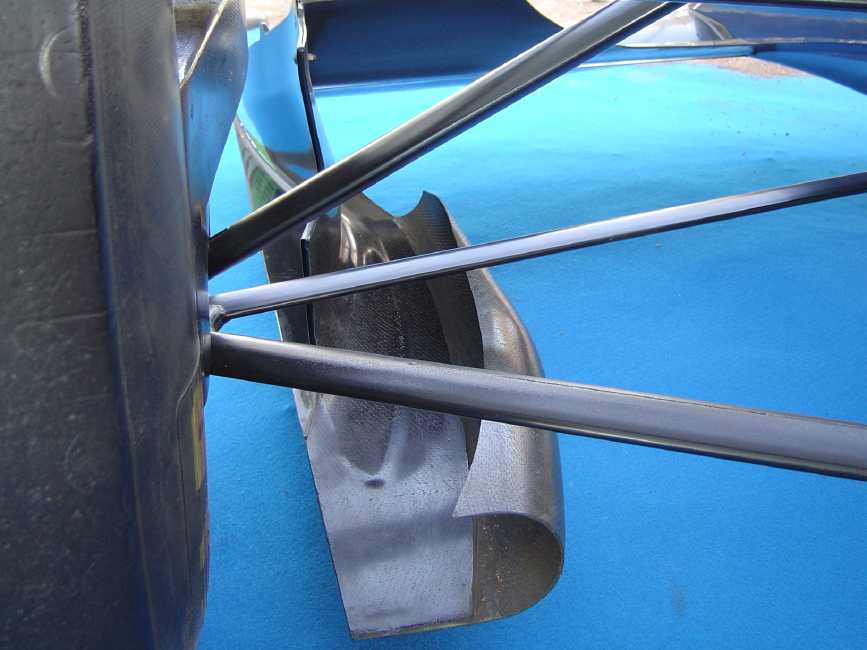 Extended front wing endplate and footplate of the 1993 Williams FW15C, image from GurneyFlap.com.

There were two schools of thought with the mid-90s to early-2000s versions of bargeboards:

Each of these concepts performed different functions, with the more forward bargeboard influencing the front tyre wake more directly, and the more rearward design having more of a benefit for the underbody. Towards the middle to end of the 00’s, as flow field analysis through CFD became more advanced, it was not uncommon for cars to have both, with the forwardmost bargeboard being renamed as a turning vane to avoid confusion in intra-team documentation.

Schematic of BAR002 showing the bargeboard behind the front wheel, image from Jeffrey 2000 [1].

The aerodynamics of bargeboards

To say that the bargeboard’s only purpose is to control the front tyre wake is to do them a great disservice, but as it can be claimed that this was their original function, let’s begin there. Bodywork is only permitted inside a volume defined by the regulations which since mid-1994 has featured an “exclusion zone” around the front tyres. Pre-2009 the exclusion zone around the front tyres was much smaller, and even compared to the post-2017 regulations when space was added specifically for larger bargeboards.

So from 1995 to 2008 the bargeboards could sit quite close to the front tyres, and therefore have a direct influence over the shape of the tyre wake. As shown below the bargeboard, in this case a more forward bargeboard as described above, does play a vital role in creating an outwash which prevents the front tyre wake from being pulled inboard and ingested by the rear diffuser. 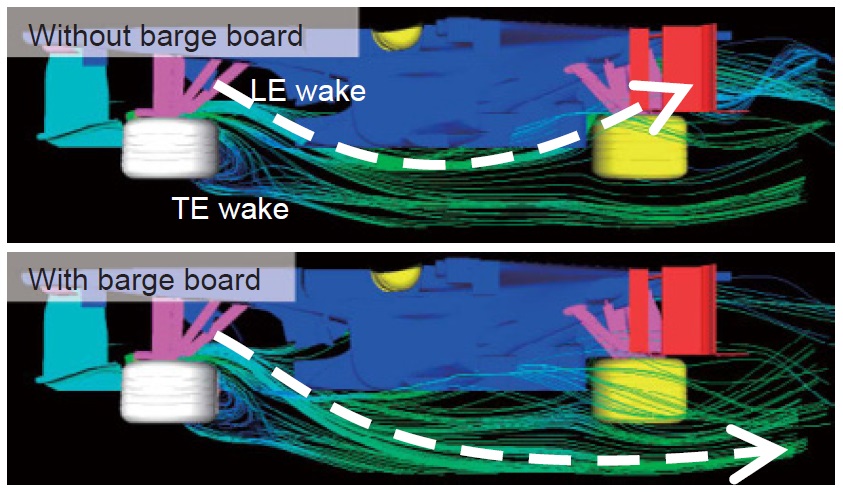 Effect of bargeboards on the position of the front tyre wake of the Honda RA106, image from Ogawa 2009 [2].

A secondary, and arguably more beneficial function of bargeboards is as downwash generating devices. Bargeboards are essentially very low aspect ratio (AR) wings flipped onto their sides, aspect ratio being the ratio of wingspan to chord,

For a rectangular wing, where b is the span and c is the chord. Because of the low aspect ratio, bargeboards produce strong tip vortices, as the circulation (

) of the vortices which are formed is inversely proportional to the span of the “wing”,

Because of these strong vortices, the bargeboards produce a lot of “induced drag”, which is also inversely proportional to the aspect ratio,

Where e is an efficiency factor which would be 0.7 for a rectangular wing, and 1.0 for an elliptical wing.

Having a large quantity of induced drag would ordinarily be a negative, however, the bargeboards and the vortices they create have such a huge net benefit for downforce produced by the rest of the car, as well as improving overall aerodynamic efficiency, they became essential to have. The upper vortex serves to rotate air downwards and under the front edge of the underbody, increasing mass flow and the effective angle of attack of the floors front edge – improving the peak suction. While the lower vortex passes under the floor its low-pressure core (below) provides a minor improvement to underbody downforce. There can be too much of a good thing though, and bargeboards sprouted footplates, similar in function to wing endplates, to weaken the lower vortex and shift its spatial position.

Offsetting the upper and lower vortices also had the benefit of increasing downwash at the floor edge even further as their downward components merge (a bit like the centreline upwash from the rear wing vortex pair). Looking at a 2017-21 bargeboard it is quite easy to see the distinct purposes of the bargeboard, with the top half designed to create downwash, and the bottom half producing downforce. 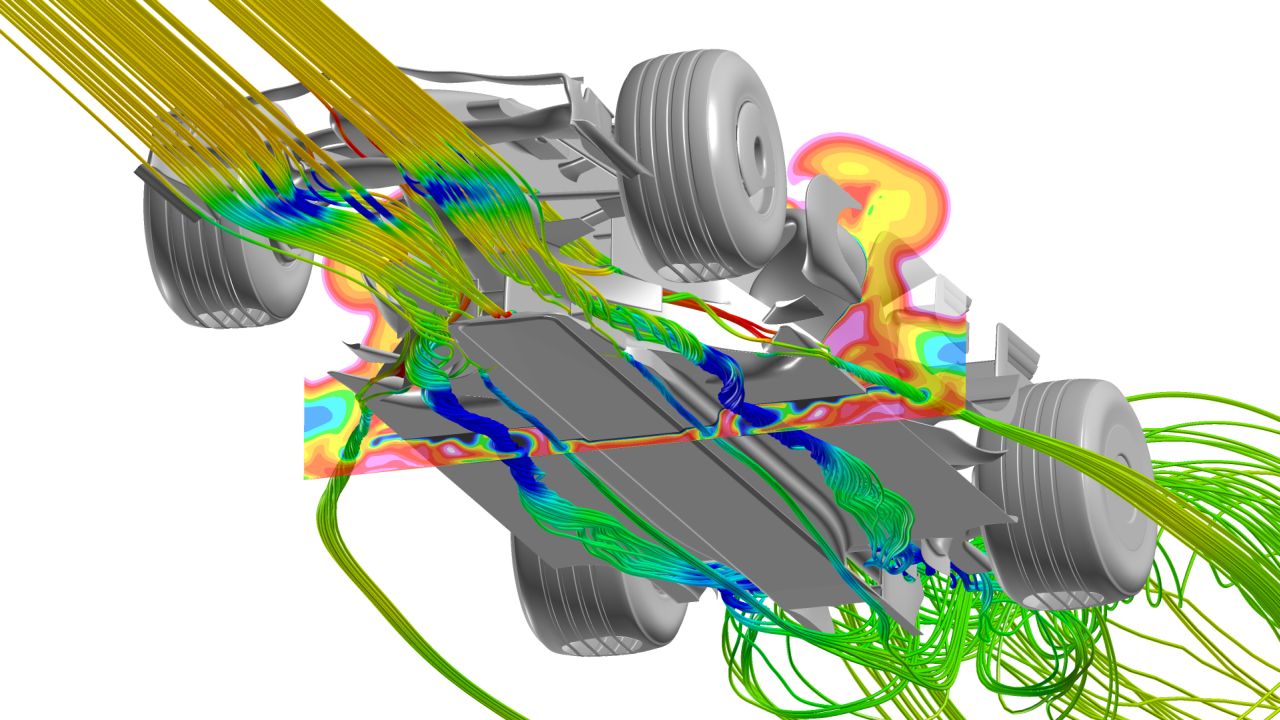 Flow streamlines passing from bargeboard under the floor of the 2008 Renault R28, image from Siemens Star CCM+.

For 2009 in a bid to “clean up” the airflow around the front tyres, to reduce downforce as well as reduce the negative impact of an F1 car’s aerodynamic wake, the regulation volume was drastically altered to reduce the efficiency of the bargeboard region. A larger exclusion zone was added around the front tyres, which made the space for bargeboards considerably smaller. While the turning vanes remained present, they had to be moved inboard and under the nose, reducing their influence over the front tyre wake. However, this put them in a position to interact with the newly formed Y250 front wing vortex – which was an unintended consequence of the 2009 rule change that happened to fulfill a lot of the downwashing function of the bargeboards anyway. The result was a much less complex front tyre wake region (below) but less downforce lost than was intended from the new rules. The double-deck diffuser and out-washing front wing endplates also helped to subvert the regulation change.

In 2017, after nine years of relatively slow cars, especially since 2014’s introduction of the heavy v6 turbo-hybrid engine formula, the FIA threw caution to the wind with a new aerodynamic formula. This meant wider cars, wider tyres, a bigger rear diffuser, and more “aggressive” styling created by swept-back wings and bigger bargeboards; all with the aim of increasing downforce to make the cars look more spectacular and reduce lap times. It must be said this has largely been to the detriment of wheel-to-wheel action which hopefully the 2022 rule change will rectify. Because the size of the bargeboard region was increased so dramatically, and because there is comparatively more freedom than the bodywork around the rest of the car, the bargeboards became a key development battleground; with a myriad of vanes, strakes, and boomerang wings, sprouting from the sides of the cars. When the 2019 rules simplified the front wing and front brake ducts, the bargeboards became even more of a performance differentiator and the aerodynamic complexity increased again. It really depends on an individual’s point-of-view as to whether these are finely crafted works of art, or overly complicated and overly expensive aero-clutter. 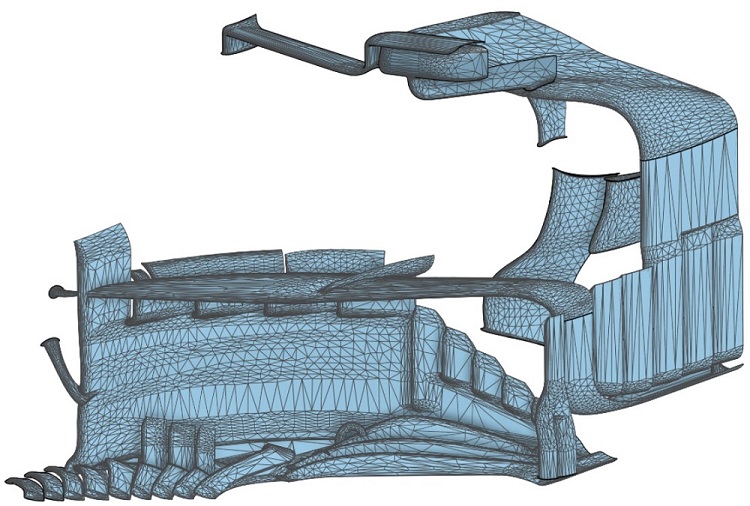 While bargeboards have been removed in name to make way for the “cleaner” lines of the 2022 F1 models, some of their functionality remains with the floor fences – the FIA allowing up to four fences per side of the car at the front of the floor. These fences are in essence very large scale vortex generators, their camber helping to produce low pressure around the inlet of the underbody tunnels, which would otherwise be producing lift. The cores of the vortices shed will then, as described above, help infer a low pressure along the length of the tunnels. These fences are more stringently controlled than the bargeboards of 2017-21, with tolerances on their camber, thickness, and vertical shape. Even still the fences will be very important, contributing as much as 10% of the car’s total downforce [5], or ~15-20% of the underbody’s downforce. The longer outermost fence featured in the more recent FOM renders may be an attempt to recreate the downwashing of the bargeboards, and rotate some airflow down into the tunnels. 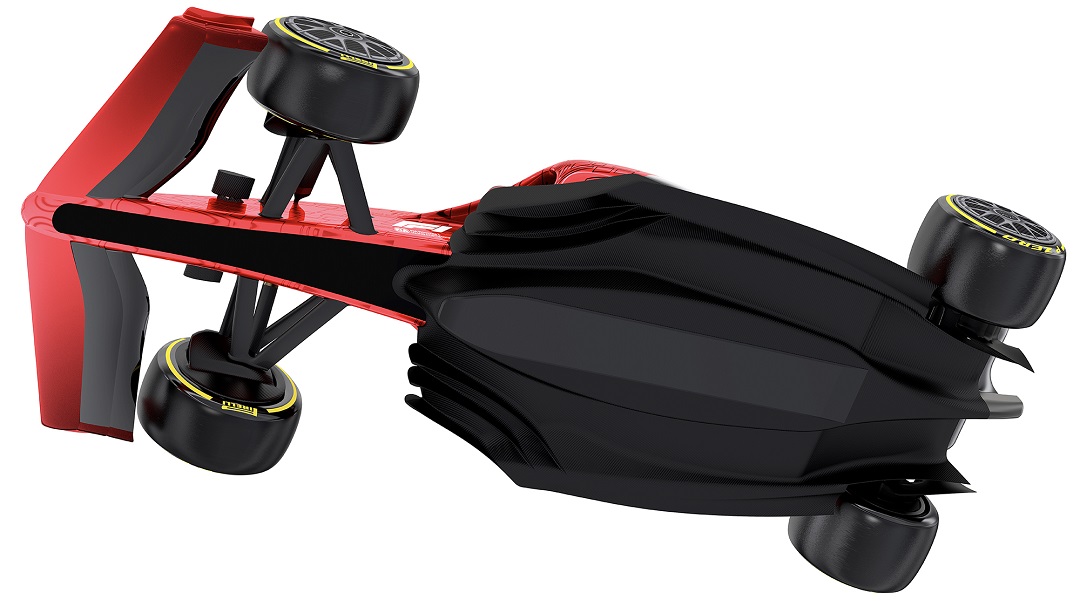 So while bargeboards have been ever present since 1994, they will be no more from 2022, but their function is being replicated by the floor fences. Fans of the complexity of the modern bargeboards will be disappointed to lose them, while fans of a cleaner aesthetic to their racing cars will be relieved to see the back of them. All that’s left to say is this. So long bargeboards, we hardly knew ye!