There’s no way to say with certainty what would have happened if Mercedes had not brought Lewis Hamilton into the pits at the end of the 50th lap of the Turkish Grand Prix, in doing so ceding positions to Sergio Perez and Charles Leclerc but protecting his advantage over sixth-placed Pierre Gasly.

But by benchmarking him against Esteban Ocon, who did complete the entire race on one set of intermediates and finished 10th, we can create an estimate.

We have to add the caveats to this that it’s a crude measure, that the way the Alpine and the Mercedes load their tyres is different and that the pair inevitably drove very different races.

But it’s still a useful comparison given Ocon was doing what Hamilton wanted to, but Mercedes aborted the attempt to: namely run to the end on his original set of intermediates.

In doing so, Ocon became the first driver to run non-stop without a tyre change in a full grand prix since Mika Salo for Tyrrell in Monaco in 1997. 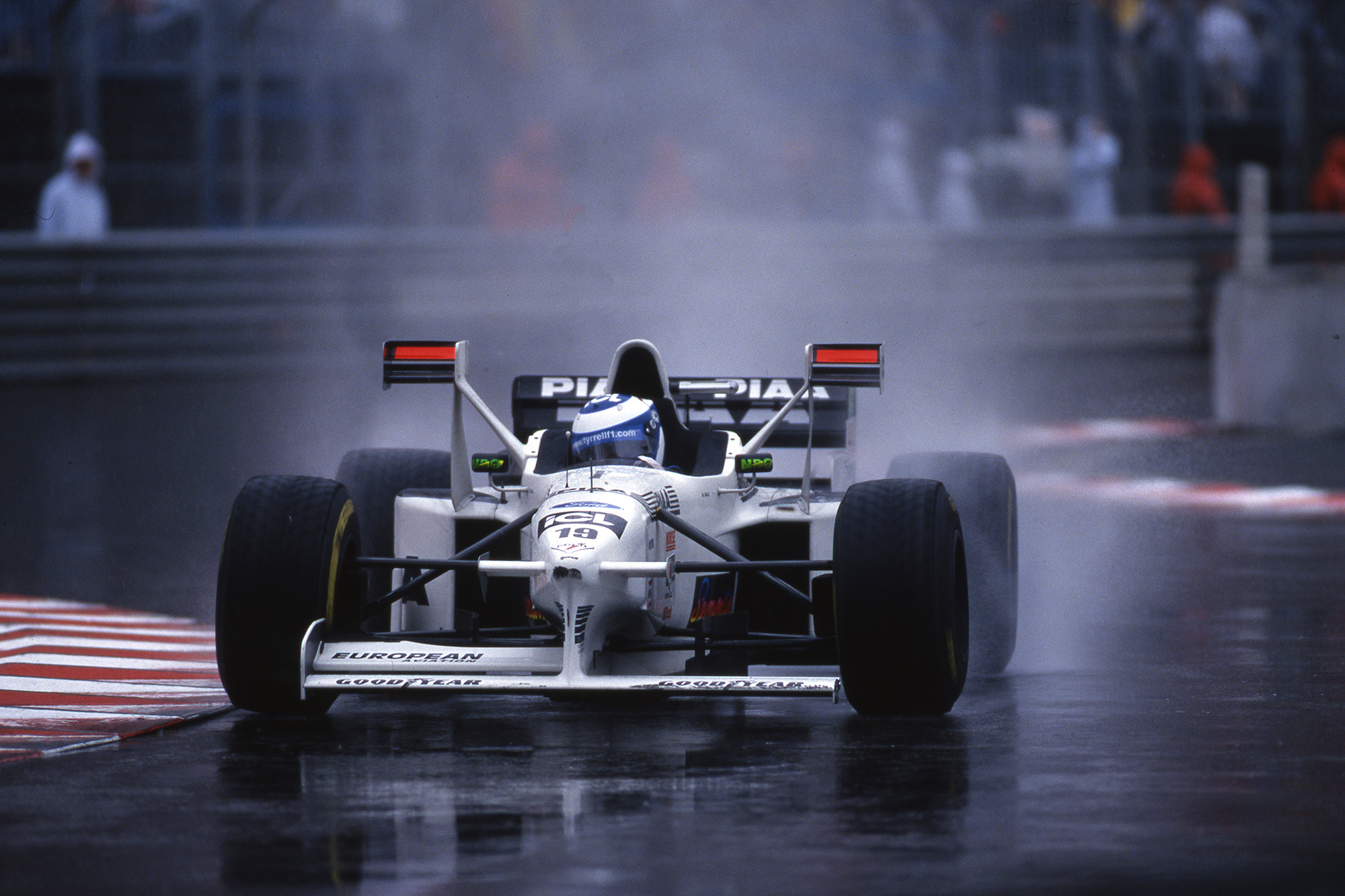 In the 10 laps before Hamilton made his pitstop at the end of lap 50, his average pace advantage over Ocon was 1.156s.

This delta can be used to calculate a notional pace for Hamilton, had he not stopped, for the final nine laps of the race.

Ocon was lapping as quickly as he could to hang onto a points position, which he did by seven-tenths of a second ahead of Alfa Romeo’s Antonio Giovinazzi. We know that this hypothetical Hamilton would also have been maximising his pace to minimise time loss.

The other confounding factor we have to allow for is that Ocon was lapped on his penultimate tour. Firstly, this means that his 56th lap was two seconds slower than it should have been given he backed off significantly and held the Alpine to the left of the track of Turn 4 to let leader Valtteri Bottas past.

In order to allow for this in this analysis, he has been awarded a lap time for that lap that is mid-way between his pace on the laps before and after.

It’s also worth noting that this had a lasting impact on Ocon’s pace as he said after the race that he lost tyre temperature when he let Bottas part, and it was difficult to rebuild given there was so little tread left. 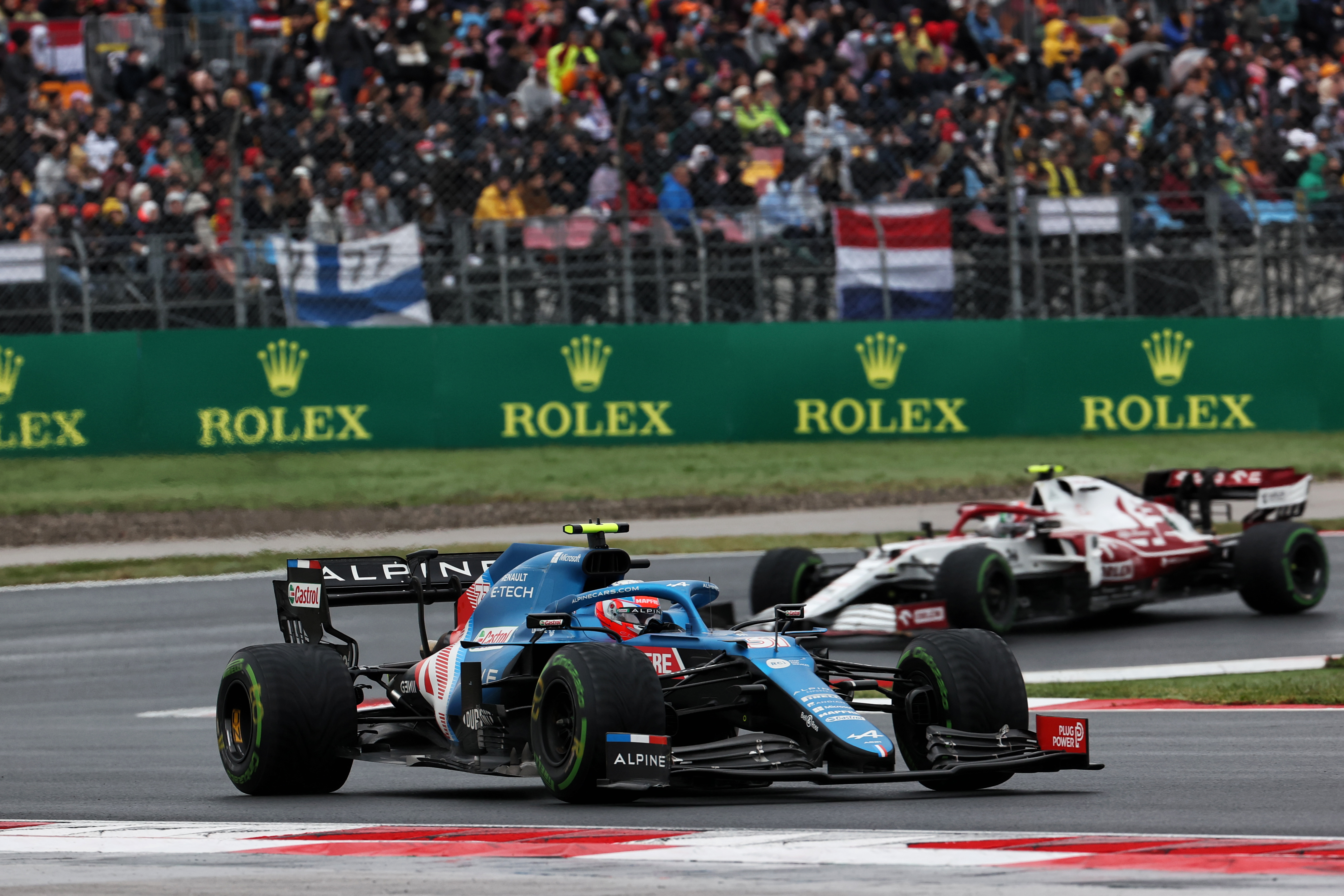 Secondly, this also means that we only have eight real-world Ocon laps from which to generate nine laps worth of data to work out where Hamilton would have been relative to him. To create Ocon’s 58th lap, the drop off in the closing stages is used to create a hypothetical lap time for him.

By using these times, we can calculate a race time for Hamilton had he stayed out. This gets him to the chequered flag in a time of 1h31m43.457s, which is actually 2.458s quicker than his actual race time. However, it makes no difference to his finishing position as he is still fifth between Leclerc and Gasly.

Inevitably, setting too much store by such a rough calculation would be foolish, but the pace comparison does indicate how marginal the difference between stopping and not stopping was.

But there is another factor that has to be considered that neither this calculation nor the live strategy calculations used by Mercedes can be precise about: how well Hamilton might have been able to defend against Perez and Leclerc. They would both have had to pass him on track had he stayed out.

Both had a significant tyre advantage. Perez was on the orthodox strategy so pitted for his second set of intermediates on lap 37. Leclerc stopped on lap 47 and was having his own troubles with graining and overheating. 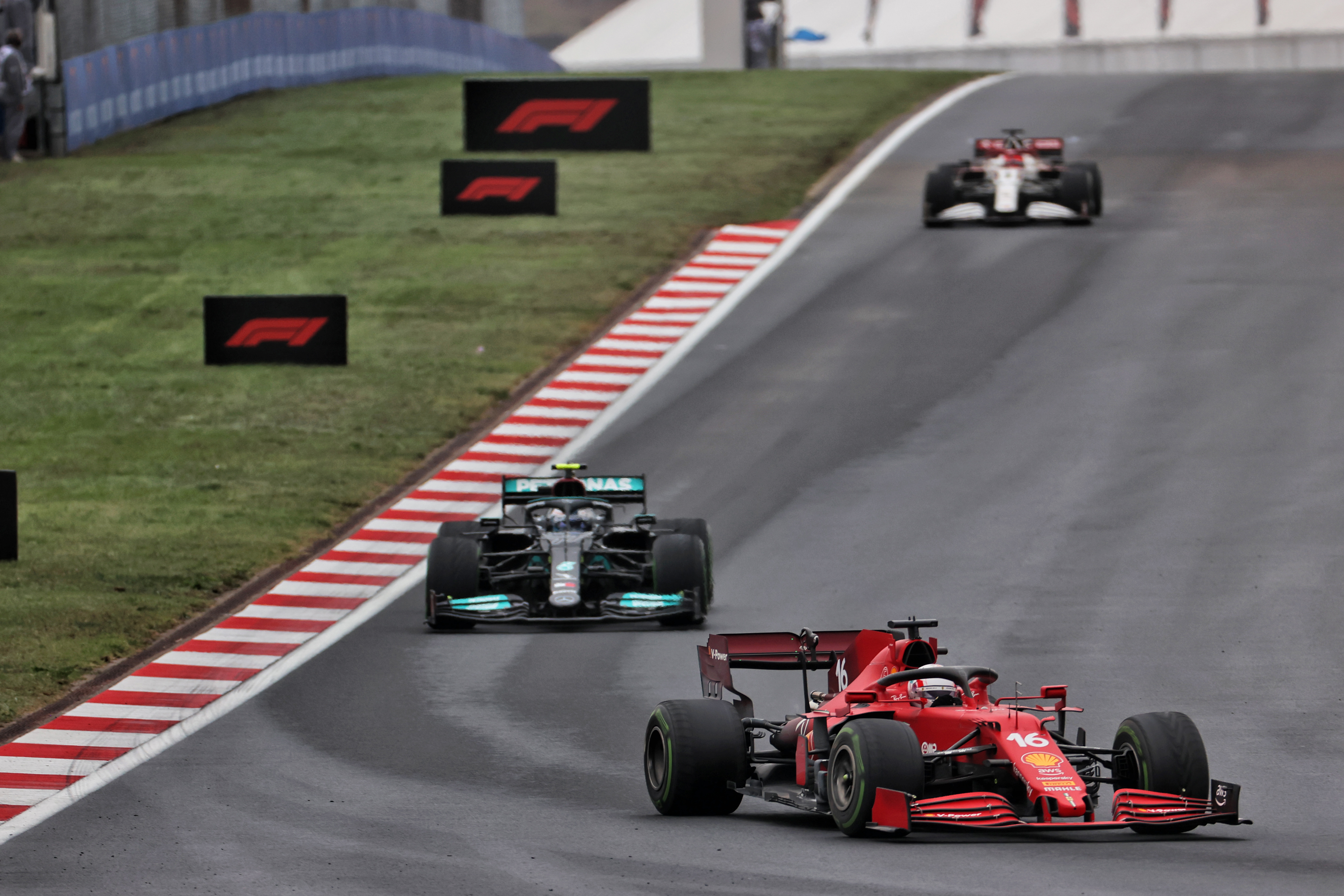 In our hypothetical race, Leclerc finishes 1.540s ahead of Hamilton with Perez 5.883s up the road. So could Hamilton have held off one or both?

It’s not impossible, although it’s hard to imagine Perez wouldn’t have got past.

Leclerc would have been another matter given how marginal the timings were, but just maybe Hamilton, even with tyres close to the limit on wear, could have done something about covering the Ferrari.

And had he not, then he still would have finished ahead of Gasly anyway. It’s also important to note that Perez and Leclerc’s pace might also have been altered had they been chasing down Hamilton.

This all tallies with what Mercedes has said about its thinking, although this analysis does suggest it was far from certain Hamilton would have fallen behind Gasly and could maybe have done something about Leclerc. This is all dependent on the tyres lasting, of course.

Pirelli’s Mario Isola, based on an initial look at the tyres, answered the question of whether they had lasted with “no – or at least it was really at the limit”.

As for Ocon, who remember went one lap shorter than Hamilton thanks to dropping off the lead lap, he suggested that “one more lap and we would have got a puncture”. Naturally, drivers always say that when things are marginal so it’s difficult to regard that with a high level of confidence.

But what was significant was Ocon had this strategy in mind from the start of the race, which allowed him to influence his management and use of the tyres.

Hamilton didn’t, which on top of having a car that loaded the tyres more aggressively thanks to having more downforce, means that it doesn’t automatically follow that because Ocon made it, the Mercedes driver could have done.

Asked by The Race when he first knew this strategy was on the cards, Ocon replied: “The whole race. I thought what we should do because we had good knowledge from last year.

“Obviously, it’s a very different track and it dried more than last year towards the end, but the conditions were pretty similar in a way. 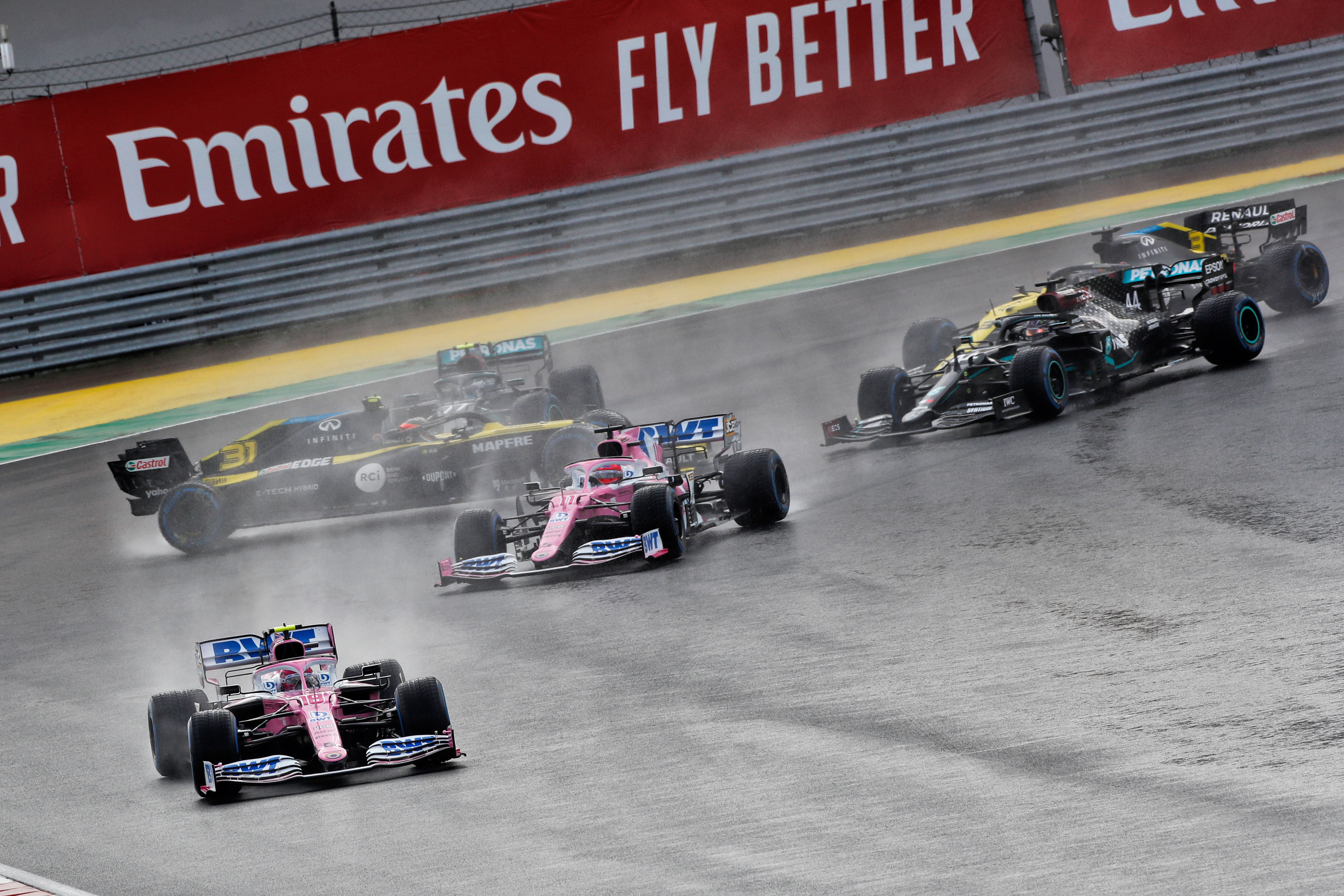 “Last year I made it work the whole race with one set because I had a lap-one incident [pictured above], so I did probably 57 laps [he actually ran 48 laps on intermediates after a second stop on lap 10].

“So yeah this year, I thought let’s do a similar thing and see if it works.”

Ocon also took extreme measures in the closing stages, staying off the kerbs even with Giovinazzi bearing down on him. The Alfa Romeo driver was 4.367s quicker than Ocon on the final lap, with the Alpine driver certain he would have been passed had the race lasted another corner or two.

As Ocon put it “we tried risk and reward and at the end, it paid off because we got a small reward, which is a point”.

So could the same risk have given Hamilton a greater reward than 10 points? Possibly, but it would have been difficult.

And the worst case scenario would have been a puncture that cost him far more than fifth place – although as The Race’s technical expert Gary Anderson wrote after the race having seen the set of tyres that came off the Mercedes, they looked capable of getting to the end.

Perhaps the most likely outcome is the one that reality produced, with Hamilton finishing fifth. But just maybe he could have pulled off a miracle and stayed ahead of Leclerc given the pace analysis suggests it would only have taken a short but resilient defence to do so.

Given how similar the race times were and the associated risks, it’s hard to argue with the decision Mercedes made even if Hamilton will always wonder if he might have picked up a couple more points had he been left out there.