Q:
Norbi, this makes up for a very disappointing weekend in Hungary, doesn’t it?

NM:
Yes, sure. I felt it was a long time coming, that a race victory would come. To be honest it was one of the most difficult races of my career because when I saw I was in front and Mikel was behind I just realised that I needed to give it 100 per cent and fortunately the car was just great. I mean I was attacking, sometimes I was sliding a bit but the balance was just great. In the end I managed to do 15 laps without any big mistakes. But I really enjoyed this fight. From the outside I’m not sure all the people understood what was happening but this race I gave it 110 per cent from lap one until the end.

Q:
You could tell that. It felt that if you made the smallest mistake he was going to be right there.

NM:
Having Mikel in the mirror is not the most comfortable thing in life as a race car driver. This made it a bit more tricky, but in the end I had confidence in myself and in the car. Thanks to the team again for setting up the car so great. And in the end as a race car driver if you have a tool like I had today, I don’t want to say it’s easy but you have the confidence and then you can push without any big mistake. But congrats to Mikel because it was just amazing to fight like this and to Esteban because he did two fantastic races today. But I’m very happy for myself to be honest. It’s just the confidence boost I wanted and needed.

Q:
And how much confidence does that give you ahead of Pau? What will Pau be like for you?

NM:
It’s difficult to tell because it’s a completely different circuit. It’s new for everyone as far as I know. It’s impossible to tell who is going to be in front. We try to prepare. I did some laps, but not a lot in the end. We have to be efficient in free practice sessions and if we are efficient analysing the driving and analysing how to set up the car I’m confident we can finish inside the top 10. But saying anything more than that is too tricky because I think the order can change upside down because it’s a jump into the complete unknown. But I’m looking forward to that. It’s nice to have a race in one week’s time because the gap since Hungary was a bit too long.

Q:
Mikel, talk us through that first corner. It must have been so frustrating.

MA:
First of all, congratulations to Norbi and Esteban for that race. Yes, a little bit disappointed on this mistake I did by myself. That’s one thing I will learn for my future myself, you always have to take it with the good things. I’m really happy with the weekend: good points for the championship. The second race I really enjoyed, battling with Norbi and trying to catch him. I was pushing since the beginning just to overtake, but I know that here it is really difficult. But I was pushing really, really hard, I felt super-confident with the car. The car allowed me to go on the limit in every corner, so I’m proud of my team, how we are managing to improve the car even with more kilograms. So really happy and I really enjoyed the last race.

Q:
Just how tough was it to get heat back into the tyres after the red flag? The temperature was dropping dramatically wasn’t it?

MA:
I made the mistake on the first start. I went to the first right corner and the rear tyres were not in perfect condition, so I lost the rear and I lost the position. The temperature here in Most is not so hot, it’s very cold, so for this tyre I think we need to work really a lot on the temperature, especially on the rear tyres. After the red flag it was not a big problem. The first laps you always need to take carefully. But after that I was looking to Norbi, he was pushing very fast and I tried to catch him. He was really fast and also I felt so comfortable I decided to push really on the limit and I really enjoyed that race. I am very proud of what we did this weekend.

Q:
You must feel really confident in yourself going ahead.

MA:
Of course. It was a really tough weekend going to Barcelona [to win the TCR Europe title], but in the end it was perfect. We won TCR Europe, now we are P3 in WTCR which is amazing considering how we started the season, so now I feel in my best moment of the season. I’ll keep working, keep focused for the next race in Pau where I think we can have a chance also. And yeah – keep fighting for the title.

Q:
Esteban, coming into the weekend you said ‘don’t underestimate me, I’m still in the fight for the title’. And you proved that with a double podium, didn’t you?

EG:
First of all congrats to the guys as well. A very intense race for the two in front and for me as well. It definitely was a very important weekend, as you said. It was do or die if I wanted to keep my chances of fighting for the title alive. Now we are in a way which is very good and I’m very happy for this weekend. Talking about this second race, it was tough, much, much tougher than Race 1. I had to push every lap, every corner. We did some changes to the car. I actually asked for that change and to be honest I went the wrong way, so I have to admit it wasn’t a good thing that I thought was going to happen. I had to use the front tyres a lot on every lap and I think Yann was also using them. He was pushing hard, losing downforce behind me and at the last two laps he had to give up. I think he’s front tyres gave up and I was also feeling that mine were on the limit. I didn’t want to speak on the radio in case it was broadcast! Yann was pushing more, but I had nothing else on tyres. So I was lucky in a way to finish the race of course and I’m very happy with the third place. We are back in the game so let’s play now.

Q:
It feels like the maximum compensation weight didn’t make a lot of difference at this circuit. Would that be right?

EG:
No, no, it does. My quallie, we could use the tyre to maximise it for one lap. It was difficult and really qualifying was very intense. I put laps together that came out of I don’t know where, but this was very good. Obviously this was an important place to tune the car in qualifying because in the races you can win at the start, which was my goal to overtake Yann. Then in the races it’s very difficult to overtake, mostly here. We suffered with the compensation weight and the Hyundais were also on 60kg and they were quicker than us in the race. We know what are our strengths and weaknesses. Hopefully Pau-Arnos is a good track for us, a bit of floating corners and so on, but we’ll also have to live with a heavy car. But it’s not an excuse. It’s always a possibility, if it’s there let’s try to grab it. 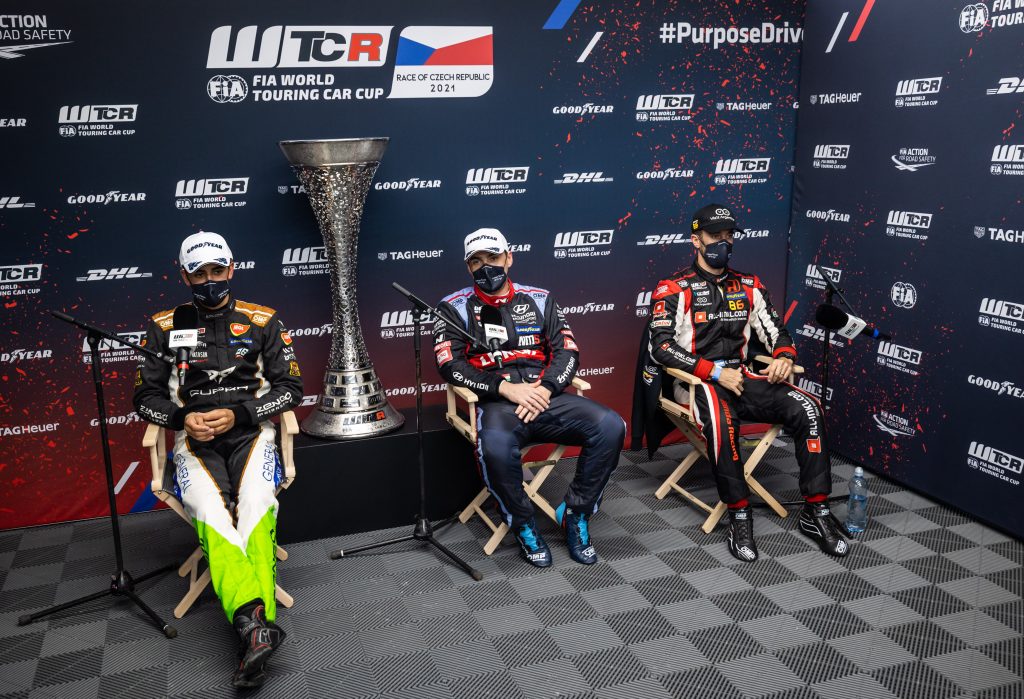