Hamilton: “my gut feeling was to stay out” 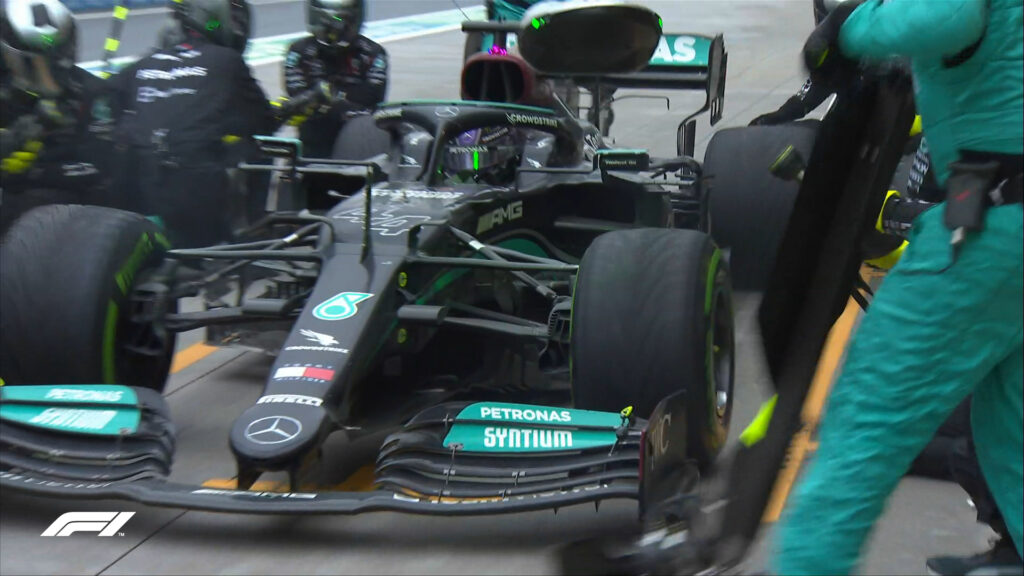 Turkish Grand Prix – While Lewis Hamilton believes that he should’ve stayed out till the end Mercedes believe an earlier stop would’ve been best.

After working his way up through the pack from P11 to P3, Hamilton and his Mercedes team had different opinions on whether stopping or not was the right call to maximise their points haul for the day. On lap 42 Hamilton was given the call to pit for fresh intermediate tyres like those around had done a few laps earlier but the seven-time champion felt the tyres he had on since the race started were still good.

The team deferred to his judgement but nine laps later had seen Hamilton’s pace drop off and called him in once again, this time their driver compiled without complaint and dropped from P3 to P5, behind Charles Leclerc and Sergio Perez.

After that the British driver became increasingly annoyed on the radio to his team as he had to deal with his tyres graining, which meant he was unable to try to regain any positions, and came under pressure from the up-to-speed Pierre Gasly and Lando Norris behind him.

Post-race, the Mercedes driver was not overly impressed with the decision and felt he should’ve gone with his gut feeling that sticking it out was the best course of action.

“I mean I’ve only just got out of the car so I don’t have all the information,” he said in a formula1.com interview. “But I feel like I should’ve stayed out. My gut feeling was to stay and I feel that’s what I should’ve done. So, frustrated at myself for not following my gut but I work as a team so did the best I could with the advice I was given. We lost a few points today so that’s life.”

"We shouldn’t have come in man"

With laps running out and running P5, Lewis Hamilton wonders about the wisdom of pitting for a new set of inters #TurkishGP

Hamilton’s Team Principal, Toto Wolff, explained to Sky Sports F1 that once their driver vetoed the initial stop decision that Mercedes were cautiously on board with that until they saw the lap times of Hamilton and Leclerc, who also hadn’t stopped, falling off.

“We thought that we could maybe hang out there and finish third without stopping,” Wolff said. “Or if a dry line appears, maybe even go onto a soft tyre until the end. So we balanced between pitting, taking it very conservative, fighting with Leclerc and Perez on the track for P3, or taking a little bit of a gamble and either winning or finishing third.

“And then we saw Leclerc dropping off and Lewis started dropping off and it was clear he wouldn’t make it to the end. I think that in the car it still felt good but he was one and a half seconds off the pace, he would’ve anyway lost the position.”

Wolff concluded that pitting when they had initially wanted to would have been for the best but it’s only in hindsight that these things can be seen clearly.

The only driver to make it to the end of the race without stopping was Alpine’s Esteban Ocon, who just managed to stay in the points in P10 and told his team after the chequered flag that “a few more corners and I think the thing would have exploded”, and while Hamilton was convinced that he could’ve emulated that no-stop feat, Pirelli disagree.

Mario Isola, Pirelli’s head of F1, told Sky F1 that Hamilton’s tyres would probably not have held up.

“Looking at the tyres after the race I would say no,” Isola said. “Or at least it was really at the limit. The wear of the tyres, especially at the end of the race, they were running basically on the construction so it’s a bit dangerous to push the boundaries like today. But I fully understand that in a race condition they have to maximise the result.

“I believe that obviously every car is different so the level of wear is different and depending also during the race how much they pushed but more or less all the tyres were with exposed cords. [The tyres on] most of the cars that stopped after lap 47/48 were completely finished.

“We know that with the new tarmac that is more abrasive, more grip compared to last year. The track was not dry but still abrasive. So it was really, really at the limit. I was suggesting our allocated engineers to warn the teams to change the tyres, not to go to the end because it was a risky move.”

The post Hamilton: “my gut feeling was to stay out” appeared first on FormulaSpy.