Things we learned from the British Grand Prix

Last weekend’s Silverstone race provided a real test for the sport with Formula One debuting its new race format and Pirelli introducing its more rigid tyres. The sprint qualifying turned out to be a thrilling action while the Milan-based tyre manufacturer’s new product performed brilliant in hot, challenging conditions. F1Technical’s Balázs Szabó takes a deep look into the British Grand Prix.

The 72nd British Grand Prix did not bring the results the championship leader Max Verstappen had hoped for after he was tagged by defending world champion Lewis Hamilton on the opening lap of the Silverstone race. The incident sent the Dutchman into a high-speed, 51G impact with the barriers, which has been his 6th retirement on the first lap in his F1 career. By contrast, his arch rival Hamilton could continue and clinched his 8th British GP victory despite a 10-second penalty.

Engine woes – Max Verstappen was not only a victim of the get-together with Lewis Hamilton, but his championship aspirations could endure another blow in the near future. The integration of power unit usually means that the components remain unharmed even in case of heavy impacts. However, the impact registered at 51G could mean that Verstappen’s second power unit suffered unrepairable damage. In this case, he would possibly need a fourth PU, which would lead to a severe grid drop penalty.

Commenting on Verstappen’s power unit, Honda F1 technical director Toyoharu Tanabe said: “When I first saw the images of the car being lifted, I thought there was a lot of damage. But in reality it seems that the damage is less than what we first saw. However, the actual damage cannot be known from its appearance when it is installed in the car. So we would like to send it back to HRD in Sakura and check it before making a decision.”

Fastest lap, but no additional point – With Max Verstappen out of the race after the opening lap, Red Bull could only rely on it Mexican driver Sergio Perez at the British Grand Prix. Despite the crash with Verstappen, Hamilton’s car was in one piece and Mercedes could perform some repair job during the red flag period. The lucky Briton was poised to take the win despite receiving a ten-second penalty for the collision with the Dutchman.

There was one thing Red Bull were not ready to concede to Hamilton though, namely the DHL Fastest Lap. In order to at least deny Hamilton the extra point, Perez sacrificed a points finish and pitted late for a third tire exchange, exiting the pit lane with brand new softs. “I think P7 was possible today,” he said afterwards. “With a couple more laps, I think I could have got Lance and Fernando, but in the end, for strategic reasons, we decided to stop to take the fastest lap.” A time of 1:28.617 just two laps before the chequered flag was enough to take the DHL Fastest Lap. Still, with Perez finishing P16, Red Bull’s race ended without scoring any points at all. 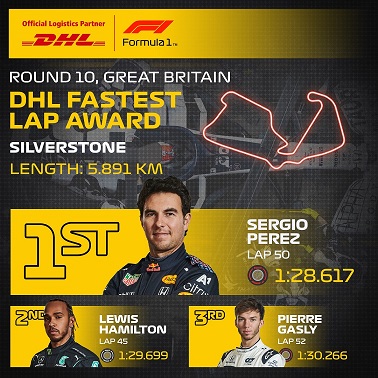 It is getting hot – Aston Martin driver Sebastian Vettel and Alpine racer Esteban Ocon competed with a fresh internal combustion engine at the British Grand Prix with the new unit being their third and last fresh engine for both. With 13 more races scheduled for the remainder of the season, both driver might be forced to use a fourth ICE which would trigger a grid-drop penalty. The other only other driver to have already started using his last fresh engine is Williams racer George Russell.

Smart move – Following his ill-fated Spring Qualifying on Saturday, Sergio Perez was forced to start the race from the back of grid. In fact, Red Bull decided to change the rear wing for a different specification ahead of the race which forced the Mexican to start the tenth round of the 2021 F1 season from the pit lane. Capitalizing on this opportunity, the four-time world champion squad from Milton Keynes installed a fresh energy store and control electronics into the car of the Guadalajara-born driver. Drivers have an allocation of two CEs and ESs for the season, and both new elements were the second unit for the Mexican. However, it was a ‘free’ change for Red Bull as Perez started from the pit lane.

Williams and Red Bull nip and tuck – While Red Bull are clearly the team to beat when it comes to tyre change, the Milton Keynes.based team got beaten by Williams as the Grove-based outfit changed the tyres on Nicholas Latifi’s car in just 2.10s. In fact, Red Bull did not need to feel ashamed as they performed the second fastest tyre changed when fitting new tyres on to Sergio Perez’s RB16B (2.14s).

Red Bull still leads the overall standings of the DHL Fastest Pit Stop competition, sitting on 273 points. Williams is the second force with 133 points, followed by Mercedes (128) and Aston Martin (115). The energy drink company-owned squad remains the only team to have performed a sub 2s pit stop with Red Bull having achieved it three times so far in 2021. 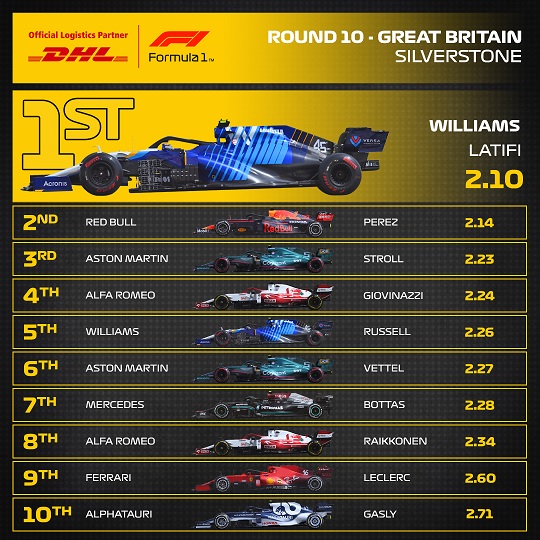 Happy times – With his 8th British GP victory and 9th consecutive podium finish at Silverstone, Hamilton ended his streak of 5 races without a win. The Briton has won at Silverstone on eight occasion with which he matched the record for the most victories at a single event – his own 8 Hungarian GP victories and Michael Schumacher’s 8 French GP triumphs.

Mixed emotions – While Leclerc scored his 1st podium finish since the 2020 British GP on August the 2nd last year, the Monegasque was understandably disappointed to losing the victory with just two laps to go. Silverstone seems to be a comfortable place for the brilliantly driving Leclerc as it was the 4th time in a row that the Monegasuq has finished in the top 4 at Silverstone.

Overambitious manoeuvre – Battling for the first position following his ill-fated F1 Spring on Saturday, Lewis Hamilton made an overambitious move on Max Verstappen when the pair approached the blindingly fast Copse corner, tagging the rear right corner of the Dutchman’s RB16B. The FIA stewards found that Hamilton was at fault and handed over a ten-second time penalty and two penalty points. The seven-time world champion has now 4 penalty points on his license in the 12-month period.

“The Stewards reviewed video and telemetry evidence. Cars 33 and 44 entered turn 9 with Car 33 in the lead and Car 44 slightly behind and on the inside. Car 44 was on a line that did not reach the apex of the corner, with room available to the inside. When Car 33 turned into the corner, Car 44 did not avoid contact and the left front of Car 44 contacted the right rear of Car 33. Car 44 is judged predominantly at fault,” read the stewards’ statement.

Nip and tuck again – With Max Verstappen’s crash and Sergio Perez’s misfortunes, Red Bull failed to score a single point at the British Grand Prix, gaining only three points from the F1 Sprint thanks to the Dutchman’s brilliant performance in the 17-lap ‘race’. By contrast, Mercedes scored a total of 43 points from the Sprint and the Grand Prix, 40, points more than their arch rivals. The big haul of points secured by Mercedes and the ill-starred Silverstone race for Red Bull saw the 44-point gap melt to just 4 points ahead of the Hungarian round of the 2021 season.

Alpine and Ferrari – Ferrari continues its fierce fight with McLaren at the British Grand Prix. The Italians surprised not only their fans, but also themselves with their eye-catching pace both in qualifying and race conditions. The Scuderia managed to cut back the gap to McLaren from 19 to 15 points, which could have been an even bigger gain for the Italian outfit had Carlos Sainz not been tagged by George Russell in the F1 Sprint.

Elsewhere, Alpine found itself in a bad run of form in recent races, but Alonso’s heroic performance in the inaugural sprint qualifying saw the Enstone-based squad score more points than its direct rivals Aston Martin and AlphaTauri. The Anglo-French outfit trails now the Faenza-based and the Silverstone-based teams by nine and eight points respectively.

Disadvantage wiped away – While Hamilton trailed Verstappen by 33 points after the sport’s inaugural Sprint Qualifying, the Briton brutally cut the gap back to just eight points after colliding with the Dutchman. McLaren Lando Norris still sits third in the table with 113 points, followed by Valtteri Bottas and Sergio Perez. George Russell, Mick Schumacher, Nicholas Latifi and Nikita Mazepin are yet to score points in 2021.